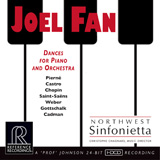 I have had the great pleasure of getting to know piano virtuoso Joel Fan over the past two years and have marveled at his mastery of solo piano works as evidenced in his Reference Recordings West of the Sun recital reviewed here in 2013. A challenging program of pieces from North and South America, it received a stellar recording in its hi-res 176.4kHz/24-bit WAV format.

Fan now takes on a very different project in Dances for Piano and Orchestra. This program features the combination of piano and orchestra works that, for a change, are not concertos. As the Fan’s liner notes indicate: “All of them, in different degrees, revel in the freedom of deploying their resources in a less, so to speak, ideological manner, taking and giving pleasure in the freedom to contrast, alternate, and combine piano and orchestra just as the spirit of the music takes them, without the need to establish any fixed pecking order.” As the playlist indicates, many (if not most) of the selections in this recital may be unfamiliar to classical music lovers:

The Pierne Fantaisie-Ballet is a youthful piece (the composer was 21 years old) and opens ominously with a quote of from the funeral march of Chopin’s B-flat Piano Sonata before becoming a more sunny and mercurial musical study. Mexican composer Ricardo Castro styled his virtuosic Vals-Capricho in the manner of Chopin with no hint of his Latin-American origins. Chopin’s Krakowiak is based on a popular Polish dance and its melodies clearly evoke the dance of the composer’s age. Saint-Saens’s “Wedding Cake” recalls the elegant era of the Viennese waltz and literally dances itself off the concert platform. We have Hungarian musical legend Franz Liszt himself to thank for transforming Weber’s solo piano piece into a robust version with orchestra. Gottschalk was generally regarded in Europe as the first authentic American composer. While most of his compositions exhibit his “New World” voice, this spritely tarantella is more in the “Old World” mode.  C.W. Cadman is better known for his numerous film scores. The work that concludes this program is a bang-up, no-holds-barred Gershwin-like piece that places significant technical demands on both soloist and orchestra.

Pianist Fan endows each selection not only with his fabulous technique but his knowing musicianship. Maestro Christophe Chagnard, founding director of the Northwest Sinfonietta, supplies sensitive accompaniment that partners the piano perfectly in each of these true showpieces for the keyboard.

I am not familiar with the Lagerquist Concert Hall at Pacific Lutheran University in Tacoma, Washington.  Judging from Keith Johnson’s recording, it seems to be a rather warm venue and is very kind to the percussive nature of the piano.  The piano occupies the foreground of the soundstage and receives a quite natural-sounding presentation.  If the orchestral details are not as apparent as in other RR recordings, the heft of the lower strings and percussion and the bite of the brass are nicely conveyed.  As in numerous earlier RR discs, the sound perspective appears to be that from a mid-orchestra row seat. I happened to have on hand an HDCD version of this program that Joel gifted me last Christmas. While it is a humdinger of a disc, the HRx disc has noticeably more air, a more potent low end, and fuller piano sound.

Bernard Jacobson contributes detailed notes about the composers and their works selected for this recital. Bios of Fan and Chagnard accompany a background piece on the Northwest Sinfonietta. Production and recording credits round out the program booklet.

In the continually growing tradition of Reference Recordings, we get another completely cherishable disc that should enjoy many plays on your system, be it a computer-based server or a compatible disc-spinner. This is the Northwest Sinfonietta’s debut album for RR and, based on what I heard, I am looking forward to hearing more from this ensemble. As for pianist Fan, I hope that Reference Recordings folks queue him up for many more recitals. Highly recommended.