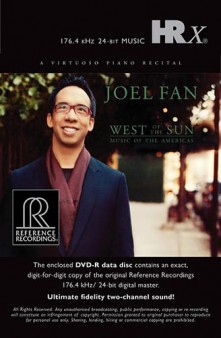 Reference Recordings takes a relatively rare foray into the classical repertoire of the solo piano, this time a recital of relatively new music from the “New World” of North and South America. West of the Sun is bravura pianist Joel Fan’s second album for Reference Recordings and, in its hi-res 176.4 kHz/24-bit resolution, is it ever a stunner!

Fan tackles some of the most challenging pieces that our Western hemisphere composers have penned for the piano with the most substantial works being the piano sonatas of Piazzola and Barber (for the entire playlist see below):

With the exceptions of Barber, Villa-Lobos, Piazzola, and possibly Ginastera, the remaining composers will be new, and, might I add, quite rewarding finds for classical music enthusiasts. Fan who is a member of fellow Harvard alum, Yo-Yo Ma’s, Silk Road Ensemble will bowl you over with his utter control of the keyboard, articulation, discrete pedaling, and, when the occasion requires, pure power.

Engineered by the Keith Johnson audio crew at Skywalker Sound in Marin County California (need I say more?) we simply get one of the best, most natural sounding piano recordings that I have ever heard. The image is dead center and the location of treble and bass are revealed as you would hear them in a live concert. This music frequently sings and the piano’s voice, a most difficult one for sound engineers to capture properly, is caught perfectly. West of the Sun was originally released as an HRx DVD-R (a 176.4 kHz/24-bit WAV file) that I have had for four years. There has been much debate about the respective sound qualities of WAV versus FLAC formats as the former is uncompressed (with less storage space) while latter is compressed then uncompressed for playback. Try as I could, I heard no obvious or reproducible differences between the WAV and FLAC versions during repeated listening comparisons.

In a somewhat unusual move by Reference Recordings, pianist Fan writes the liner notes that must be described as both authoritative and eminently readable. Original cover art shows our artist to be more youthful than expected, belying what is a most experienced and accomplished recital.

Another “five-disc” award? In this case, if my editor Brandon DuHamel would allow me to award six of them, this recording would definitely deserve them. The program is innovative and presents the great range of Western Hemisphere music by some of the best composers you may never have heard of. Best of all, Fan’s incredible virtuosity is delivered in ne ultra plus sonics by Johnson and company.  West of the Sun is not only a must have download currently available from Acoustic Sounds, but will end up certainly on my list of best hi-res downloads of the year.