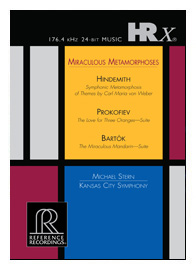 It has been a while, about 18 months to be precise, since I have had a chance to audition a Reference Recordings HRx disc. For those unfamiliar with RR’s high-resolution line of “elite” recordings (many also available in HDCD and SACD versions), these are 176.4k/24-bit WAV files on DVD-R data discs that, in the company’s words are “exact digit-for-digit” copies of the original masters, and intended for playback as downloads to computer-based music servers. Fortunately, listeners with Oppo Blu-ray players (mine is a BDP-105) or PS Audio PerfectWave Transport/DAC combos can play these discs as if they were Red Book CDs (which they clearly are not!)

The first of RR’s new releases to make into my player was a program of sonic spectaculars played by the Kansas City Symphony, an ensemble that conductor Michael Stern has molded into a truly first rate symphony orchestra.  The playlist follows:

Hindemith’s Symphonic Metamorphoses is in four movements. The first movement Allegro in A minor takes its origin from a Weber piano piece (Op. 60); the second is a Scherzo based on incidental music for Carlo Gozzi’s play, Turandot; the third, an Andantino from a piano duet (Op. 60); and the finale, a big-boned March in G minor again based on the Op. 60 piano pieces. Prokofiev composed his second opera, The Love for Three Oranges, on a commission from the Chicago Grand Opera Company that staged its world premiere in 1921. The story stems from another Gozzi play and the third of its six movements, the March, is by far its best- known section. Famous 20th century Hungarian composer Bela Bartok composed his second ballet, The Miraculous Mandarin, in 1919, although it waited nearly seven years for its premiere. The rather dark story centers on a young woman who sells herself to strange men before finally encountering the Mandarin. She dances for him and, overcome with passion, the Mandarin tries to chase her but her evil comrades murder him. The Mandarin dies in the young girl’s arms.

All of these 20th century masterpieces for orchestra are texturally and thematically quite different from each other.  The demands placed on the players are substantial and the KC forces handle the dynamics and colors of each piece extremely well. Of course, much of the credit must go to Maestro Stern who has a clear affinity for this repertoire. Whether it is the rousing conclusion of the Hindemith Metamorphoses, the infernal scene of the Prokofiev suite or the buzzing string introduction of Bartok’s ballet, each work gets its due and then some.  Having heard each of these pieces more times than I can recall, I do not recall an instance when, taken as complete program, I have heard them better performed!

Recorded in Helzberg Hall at the Kaufmann Center for the Performing Arts, the home of the Kansas City Symphony, Prof. Keith Johnson’s recording team did simply what they always do: turn out realistic, spacious, and dynamically spectacular recordings. Details, particularly those of the delicate woodwinds waft over the rest of the orchestra, while the tympani (plentiful in all of these selections) are appropriately earth-shaking. What consistently emerges from this recording is a complete sound picture of the orchestra as would be obtained from a highly desirable mid-orchestra row seat.

Reference Recordings supplies an informative program booklet with background essays on the composers and their works by Richard Freed, a brief biography of the orchestra and its conductor, and detailed recording credits.

This HRx high-resolution disc is an outright winner in every possible sense of the word. Great repertoire, matchless performances, and a superb recording combine for as good a rendition of a modern orchestra that we are likely to get. Highest recommendation.