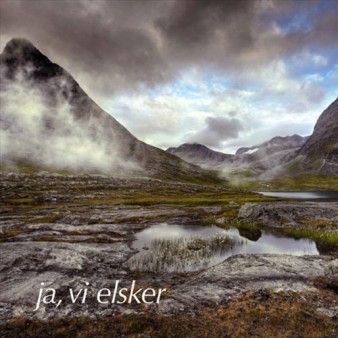 Fans of Norwegian nationalistic music, rejoice, your prayers for a high-resolution Pure Audio Blu-ray™ release have been answered. For everyone else, Ja, Vi Elsker Dette Landet (Yes, We Love Our Country), the Norwegian national anthem or “Song of Norway”, will be a major discovery of music from this small but proud country that has endured for centuries.

Featuring well-known (at least to Norwegians) pieces by famous Norwegian composers that have been appropriately updated for wind band and, occasionally for choral forces, Morten Lindberg one of the two “L”s in 2L (Lindberg Lyd or Lindberg Audio) gives us a true labor of love.

The playlist will have a few tunes that may actually be familiar to those not residing in Oslo, Bergen or Lillehammer, beginning with the opening anthem of “God Save the King.”

The Staff Band of the Norwegian Armed Forces (previously heard in the stunning La Voie Triomphale recital) is a seasoned group of great wind players and percussionists that gives us the essence of each piece. The Schola Cantorum (Hymn to the Virgin) is a top-notch Norwegian vocal group that, as native Norwegians, adds authenticity to the eight works that include a chorus. The committed leadership of Ingar Bergby (Staff Band) and Tone Bianca Sparre Dahl (Schola Cantorum) bring this recital together in superb fashion.

The Pure Audio Blu-ray™ was laid down in DXD 352.8kHz/32-bit resolution, then downsampled to merely 5.1 DTS-HD Master Audio or 2-channel LPCM (both 192kHz/24-bit). Two venues, the Jar and Uranienborg Churches, are appropriately sonorous sites that the 2L team absolutely nails. Demonstration-quality for sure with ultra-realistic presentation of voices and instruments. While the two-channel version is good, it pales in comparison with the surround option.

2L gives us the expected hybrid (and multichannel) SACD along with mShuttle downloads of MP3 and FLAC formats. The program booklet provides relatively long pieces on the program, its relevance to Norwegian nationalism and the primary rationale for this recording, the 200th anniversary of the Norwegian Constitution. The good news is that there are lyrics for the vocal selections. The bad news is that they will benefit only native Norwegian readers as no English translations are included.

Readers of this site may already know that I am a band music sucker (being a “bandie” in my youth). With a band as good as the one on this 2L release, we could get the phone book as a score and still find it enjoyable. Fortunately, we get some excellent Norwegian music that might not have been on our radar but now, thankfully, resides in our respective occipital lobes. While I was somewhat surprised to find only one Grieg transcription (Hyldningsmarsj or Heroic March from Sigurd Jorsalfar), his being Norway’s best known composer, the remaining works were high quality pieces that fell quite pleasingly on my ears. In our troubled times, there is solace in music that speaks so directly to the people of one nation, now on the sidelines of world events. This program will not solve the global problems, but it will give listeners much needed relief and optimism, at least for 80 minutes. Thank you Morten Lindberg and keep up your good work.