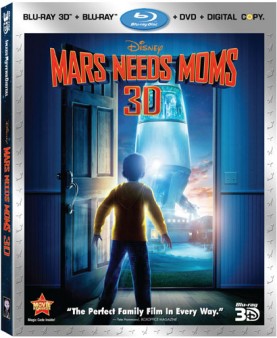 The feature-packed Blu-ray and Blu-ray 3D releases will contain the following extras:

Blu-ray 3D:
Everything on the Blu-ray & DVD plus….

Blu-ray 2D:
Everything on the DVD plus… 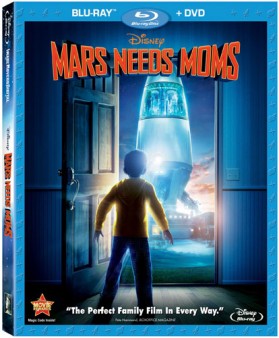 Technical specs for the Blu-ray and Blu-ray 3D release include a high definition 2.40:1 transfer with DTS-HD Master Audio 7.1 soundtrack.

Disney also has a special website for fans to promote the film located at https://www.disney.com/marsneedsmoms

and of course nothing is complete these days without a Facebook page (https://www.facebook.com/MarsNeedsMomsMovie) and a Twitter page (https://twitter.com/disneypictures) you can also check out trailers and video clips for the film at the Youtube site Disney has setup for the film located here: https://www.youtube.com/disneymovies.

Film Synopsis:
Take out the trash, eat your broccoli — who needs moms anyway? Nine-year-old Milo (Seth Green) finds out how much he needs his mom (Joan Cusack) when she’s nabbed by Martians who plan to steal her mom-ness for their own young. In a race against time and oxygen, his quest to save her knows no bounds. And with some unexpected help, Milo just might find his way back to her — in more ways than one.