Naxos, the world’s leading classical music label, known both for recording exciting new repertoire with exceptional talent and for distributing a large number of classical labels internationally, including Opus Arte, Euroarts and 2L, has decided to join other audiophile labels such as 2L and AIX and enter into the Blu-ray Audio market.

The label plans to start releasing in the high resolution Blu-ray Audio format by October, with the premiere release being contemporary classical composer John Corigliano’s Circus Maximus, recorded at a high resolution 88.2kHz/24-bit and appearing on Blu-ray in a discrete DTS-HD Master Audio 5.1 mix along with a PCM 2.0 mix.

Naxos founder and president Klaus Heymann and composer John Corigliano were in New York City today, July 14, 2010, to demonstrate the Corigliano Circus Maximus Blu-ray Audio release and TheaterByte was happy to be invited and in attendance.

The reference equipment was as follows: 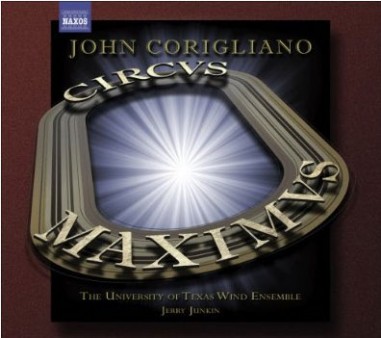 The 5.1 mix fully utilized the surround channels for a discrete “stage” mix perspective, it was dynamic and clean, smooth and well balanced. The composer himself jokingly remarked that the disc should come labeled “this disc should be played loud” and indeed it should. A quick check of the stereo mix, also in 88.2/24, showed good stereo separation and dynamics, but certainly sounded more “closed” than the brilliant surround mix, that the composer aided in remixing himself.

Naxos President and Founder Klaus Heymann said that after the initial Corigliano release, there will be a release of Mahler: Symphony No. 8, and then five more Blu-ray Audio releases, after which the label plans to release three or four a month. He is also adamant that Naxos will only be releasing on Blu-ray original high res releases — meaning, only 24-bit, 88.2kHz or 96kHz recordings. They will not be up-sampling older digital recordings or transferring analogue recordings to the Blu-ray Audio format.