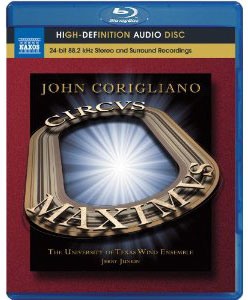 John Corigliano is one of the preeminent composers of our time. I first became familiar with his unique musical voice through the opera “The Ghosts of Versailles” which premiered at the Metropolitan Opera in 1991 and the Symphony No.1 which memorialized victims of the AIDS epidemic.  The two works on this surround-sound high resolution Blu-ray disc span his composing career: Gazebo Dances (1972) and Symphony No. 3, Circus Maximus (2006).  The recording features Jerry Junkin conducting the University of Texas Wind Ensemble.

Circus Maximus, the major piece presented here, is in 8 contrasting movements lasting 35 minutes. Corigliano’s program notes reveal that the inspiration for this work stems from the barbarity of ancient Rome, the location of the original Circus Maximus.  It opens with a brass fanfare (Introitus) which highlights a “surround band” as well as a proscenium wind orchestra.  Fortunately for the listener, the surround effects are used judiciously in the other movements culminating in a marching band sequence that moves through the listening space in the climactic movement 6 (Circus Maximus). The use of contrasting musical styles is quite effective in conveying the mood of each movement. Movements 3 and 4, entitled Night Music I and Night Music II, are different studies in the reflective “night music” of the impressionist era (Night Music I) and the hustling night scenes of contemporary urban life (Night Music II). The  aggressive and craggy Circus Maximus leads into Prayer (Movement 7) which presents an introspective theme of great beauty.  The finale, Veritas, or Truth, recalls the opening Introitus.

Gazebo Dances, the accompanying piece, was originally written for a piano four-hands and has been transcribed for a wind ensemble.  It has 4 movements: Overture, Waltz, Adagio, and Tarantella. As Corigliano states in the program guide, “The title Gazebo Dances was suggested by the pavilions often seen on village greens in towns throughout the American countryside where public band concerts were given on summer evenings early last century.”  Each movement harkens back to a different style. “Overture” has clear neoclassical roots, recalling Leonard Bernstein’s Candide. “Waltz” is a quirky and rarely three-quarter time movement with obvious  overtones of Dmitri Shostakovitch.  “Adagio” has a Coplandesque soothing melody.  “Tarantella” looks back to the composer’s Italian roots and gives the piece a rollicking finish.

The soundtrack is in DTS-HD Master Audio (88.2kHz/24-bit) 5.1 and it is clear that this piece was written with both the surround and high resolution medium in mind.  The surround effects are limited to Circus Maximus and, as mentioned earlier, are used sparingly but to great impact. I have heard pieces in which surround sound gives equal partnership to all speakers.  The so-called “sonic immersion” of such recordings has usually just given me “sonic fatigue.” This is nicely avoided here.

The mantel of conducting symphonic band music has nicely passed from the legendary Frederick Fennell to Jerry Junkin.  Although this is  my first hearing of the the University of Texas Wind Ensemble, it appears that they have been finely honed to a high degree of professionalism.  Intonation was spot on and given the complex sonorities of Circus Maximus, the brass section acquit themselves extremely well.

There are no supplemental interviews, just trailers for other videos in this series.

This is sonically spectacular music, particularly the Circus Maximus. Further, this performance must qualify as definitive, given the composer’s involvement with the project. The cinematic qualities of the title piece are not surprising given Corigliano’s success in composing for motion pictures.  This is not a criticism as some of the best composers of the last century, Prokofiev, Shostakovitch, and Villa-Lobos,  turned in some of their finest efforts for the silver screen. This is the first Blu-ray audio-only release that I have the opportunity to hear. Given the exemplary sound reproduction and the ability to use surround-sound in a tasteful rather than garish manner, I would hope that more will follow.