Once Upon a Time in America: Extended Director’s Cut Blu-ray Review 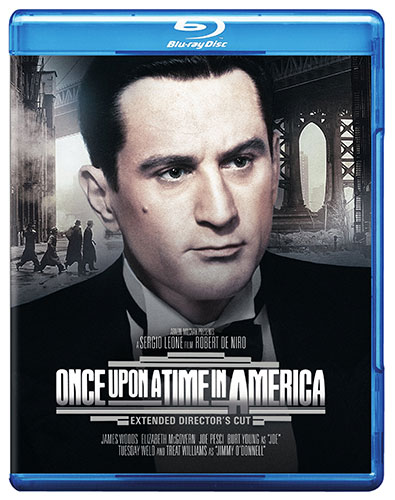 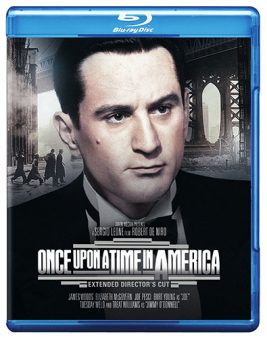 Sergio Leone’s final film, Once Upon a Time in America, is a sprawling, non-linear masterpiece that spans five decades in the life of its protagonist, the antihero David ‘Noodles’ Aaronson (Robert DeNiro) and his gang of hoodlums from New York City’s Lower East Side. Captured with stunning cinematic vision of the period by Tonino Delli Colli and with a masterfully emotional score from Ennio Moricone, the film put an exclamation mark on the end of the gangster movie revolution that began with The Godfather and was in many ways Leone’s reaction to and reexamination of the gangster mythology.

Leone’s protean timeline shifts between the 1920s, 1930s, and late 1960s as he follows Noodles’ evolution from a petty criminal and street urchin on the Lower East Side and his meeting of friend and eventual partner in crime Maximilian ‘Max’ Bercovicz (James Woods), through the 1930s as Noodles, Max, and their pals become big players in the bootlegging game during prohibition, until finally Noodles goes into hiding and returns to New York City in 1968 to finally learn the truth about who betrayed him.

The film was originally released in the United States horribly gutted down to a 139-minute length and reedited to force it into a linear timeline. Those edits detract from the Leone’s original vision, loose use of flashbacks, flashforwards, and reveries to tell an anguished and gripping tale of betrayal, lost love, and regrets. We feel Once Upon a Time in America‘s sense of hopelessness the most as we reach the closing act and Noodles, now an aging man, realizes how much he has lost due to all the bad choices he has made.

One can only fully appreciate Leone’s film in its unedited, non-linear form, even more so in this “Director’s Cut” that adds an additional twenty-minutes of footage. In these versions we feel the overriding sense of listlessness and torpidity, and finally melancholic resolve playing out much as real life does, not always in direct lines, but in a series of mistakes, regrets, hindsight, and losses, devoid of the heroism found in so many other gangster films.

This Extended Edition Director’s Cut of Once Upon a Time in America has been scanned in 4K resolution and brought to Blu-ray in an AVC/MPEG-4 1080p encodement from Warner. Generally speaking, it looks gorgeous given the nature of the film, its age, and the various techniques Leone employed. The additional 20-minutes of footage, while every effort has been made to reintegrate them as seamlessly as possible, standout quite conspicuously, having come from lower quality reference prints. Their contrast and color timing is completely incongruous with the rest of the film and also shows more source damage. Apart from this, this is a very enjoyable film to watch with rich midtones  and a natural filmic appearance. Shadows look a bit flat, however, with a slight bit of crush, but this is more to do the artistic choices than the transfer itself.

The audio for this release has been remixed and remastered into 5.1 and included on the Blu-ray in DTS-HD Master Audio 5.1. Unfortunately for purists, no version of the original monaural soundtrack is provided. As much as the 5.1 mix is appreciated, much of the time it nearly sounds monaural, with the majority of dialogue coming from dead center, only very mild atmospheric effects at best coming from the surround channels, and the low frequencies being extremely subtle as well. Furthermore, as with the visuals for the re-edited sequences, the audio for this added scenes also drops off in quality.

This one-disc version of the Director’s Cut of Once Upon a Time in America doesn’t offer much at all in the way of supplements, not even a digital copy. We only get an excerpt from the documentary profile of Sergio Leone and a couple of theatrical trailers. There is also a one page insert describing the re-edit and transfer process, but it mimics what appears on disc and can be seen in the screen capture in the Video Quality section above.

Leone’s Once Upon a Time in America is truly a masterpiece of cinema and a fitting final creation for this remarkable filmmaker. One has to see this epic crime drama in its non-linear, unedited form, 229-minutes or, now, even longer here at 251-minutes. It should be mentioned that in addition to the single-disc Blu-ray version reviewed here, there is also a two-disc Collector’s Edition set with Hardcover Book and Digital HD UltraViolet available.